skip to main | skip to sidebar

The final chapter is now complete 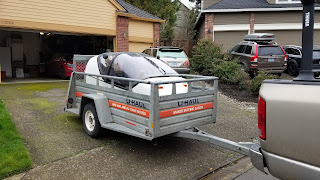 I have not driven the TWIKE in several years now due to problems with one of the BMS boards.  My efforts to debug the board or get one of the 10 or so spare boards working has not met with success.  I finally decided it was time for the project to go to a new owner so I posted on several local email lists looking for a new project owner.  I found one at the local Pacific University in nearby Forest Grove.  I am hopeful it will go to helping a new generation learn about EV history and spark their interest as it has done mine.  Since the TWIKE was my first EV, I have driven a 2011 Think City, a 2016 Nissan Leaf, and a 2018 Telsa Model 3.  Above, is the picture of my TWIKE leaving my driveway for the last time in a same sized trailer that I used in 2008 which I purchased it from a back yard in Portland.  It has been a good 12 years.
Posted by Phil Hochstetler at 1:25 PM No comments:

Back on the road again! 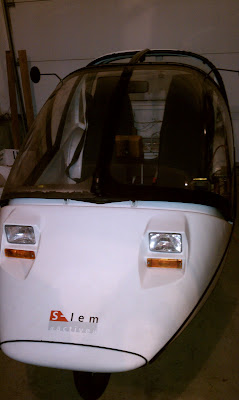 Last night I finished buttoning up both packs after soldering in all the connection wires between the groups of cells and adding in a fuse holder to each pack. I also had to create new carry straps. My first design was a fail as it had metal catches and was designed to be used for a load tie-down. Unfortunately, there is not enough room between the batteries for this to work properly and I nearly had a situation where I get to batteries in the car and could not remove them. After some thought, I went back to the original Twike design which is a knotted loop of rope. I did do a wrap of duct tape on top and bottom to prevent it from dislodging. That worked great. I charged the batteries for the first time and did some tentative drives around the neighborhood. I don't think the cells are balanced yet as they are in various states of discharge when I joined them. The car will do a balance charge when doing a normal charge (jog charge is at a faster rate and avoid the balance phase). I put on 8 miles in the evening giving my kids rides. If it all goes well, I will put in the back shelf cover and try to drive it to work tomorrow (about 16 miles round-trip). If that all goes well, I will attempt to take it to the OEVA meeting in Portland tomorrow night. Only about 9 miles or so but I do have a elevation climb of about 1200 feet (at night with the lights and wipers on :-) Wish me luck.
Posted by Phil Hochstetler at 5:18 PM 5 comments: 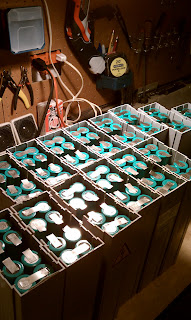 I've spent two sessions now with the battery tab welder. The first was to create 5 cell groups. I then had to take the 5 cell groups and bend the tabs so the cells were end to end. I used a PVC pipe from Home Depot which was a slight oversize on the cells to assist in aligning them when bending the tabs. This 5 cell group was then wrapped in a tough 5 mil heat shrink to form a "stick". I assembled all these sticks (112 of them) into 4 stick groups. Each of the 4 stick groups has two tabs welded to the bottom, and 3 on the top. It was difficult to find, but I finally found a place to get 10 mil nickel tabs (and did not force me to order 5kg worth). Previously, I could only get 5 mil tabs which I think are a bit small for the top and bottom tabs as they see much harsher physical stresses. I checked each of the groups with a voltmeter and all were within 0.2 volts of each other. This means I have no dead cells (opens or shorts). I did build 2 extra 4 stick groups in case I need to swap them out and I will keep them as a future spare parts. What remains is to install the 2 new Battery Management Boards, install the removable fuse, replace the cover (may think about replacing the fans as some point as they do not move much air) and test the packs in the Twike. I hope to be back on the road soon (and just in time as gas heads for $4/gallon). Expected range will be 30 to 40 miles per charge. I might think about building a mount for my third pack as well as the car supports it (program BMS to bat3 and plug it in). I'm concerned that packs of mixed capacity might cause the charger some problems but maybe not as it can open the charge relay on a per pack basis. I'll leave that to a future project.
Posted by Phil Hochstetler at 9:24 AM 1 comment: 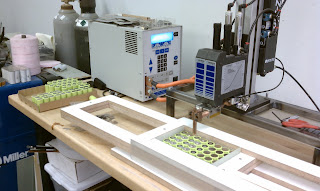 In the last two days, I have battery tab welded 600 cells into 5 cell groups. The 5 cell groups need to be arranged cell end to end and shrink wrapped. I will do some basic testing to catch any bad cells before going farther. Then, 4 sticks make up one group of cells and I need 14 groups for each pack (560 cells total for the two packs). Once I have that done and two working BMS boards, the Twike will be back on the road. I decided to stop trying to fix the bad BMS boards and just order two new ones from Germany. I'm expecting them shortly. The cells are the "no longer made" SANYO CP-3600CR. I found a place to buy most of their remaining stock for about half of what digikey wants.
Posted by Phil Hochstetler at 7:53 PM 1 comment: 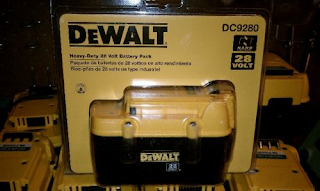 I've been busy with other projects but it is time for an update. My twike has set idle for the last 12 months while I sort out battery issues. The old NiCad cells from 1985 are pretty much shot but I have put together (after much testing) two packs with the best cells from the 5 packs I have. Unfortunately, while installing the packs into the car, I shorted out one of the NTC temperature wires on the mid pack fuse resulting in damage to the BMS board. The car will not charge without two (min) working BMS boards, so I'm down until I get that fixed. I finished my testing of A123 cells and found them of high quality and quite reasonable to work with. To make them work with the car will require me to design or purchase a factory BMS solution. To date, this is more $$ than I am willing to spend, so I'm exploring selling all my lithium batteries, buying replacement NiCad cells, and replacing the battery cells myself. The DeWALT LifePO4 packs are now up on ebay.com (selling slowly) and I found a great deal on 3.6Ah SANYO C size NiCad cells (no longer made). I bought enough cells to replace 4 packs with the idea of doing my two packs and 2 packs for a fellow Twike owner in the USA. He agrees with me that the cost of the lithium upgrade when bought from Europe is just too expensive at this time (most of the cost is importing the cells). Next steps are to fix one of the broken BMS boards (or order a replacement from Germany for >$500USD), then begin the process of replacing all my old Panasonic 2.8Ah cells with the new SANYO 3.6Ah cells. I have friend who has a battery tab welder (makes his own A123 packs) who will rent me time and I just need to order some more Nickel tabs (only have 100) and thermistors, some shrink wrap for the cells, and it will be time to perfect the art of pack creation. I hope to have the packs refurbished by the end of the year (given time constrains).
Posted by Phil Hochstetler at 9:31 AM 1 comment: 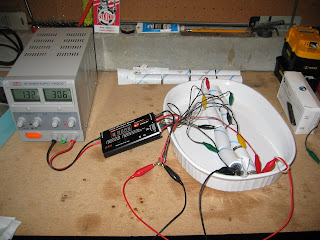 More battery pack construction. Here I am balancing groups of 8 cells. I'm connecting 5 eight group cells in parallel so it results in groups of 8s5p. I'm using the Chargery DB8 balancer and a lab power supply to charge the cells. Only takes a few minutes to achieve a full balance as these cells are brand new. I'll do some full charge/discharge curves on each group of cells before putting them into the pack to identify any cell defects upfront. I'll have more pictures and descriptions as I get further along on the pack construction. I can not tell you how careful you have to be with metal around these very powerful cells. I remove my wedding ring when I work and have a fire extinguisher handy to deal with any meltdowns. Also, note I place the cells into a fire safe container even though it should not be possible to get these cells to burn (safe LiFePO4). Also, I've got 70 8 cell Dewalt DC9280 tool packs to harvest cells from so it will take a while.
Posted by Phil Hochstetler at 10:44 PM No comments: 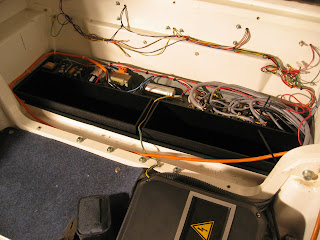 I drove the Twike more almost all of my driving in July and August (>800 miles on the odometer now). Unfortunately, very hot temperatures (>104F), some long drives (>15 miles), and some other circumstances resulted in several of the old Ni Cad cells shorting out (death for a Ni Cad). Thus my two 12-13 year old packs were unbalanced and would not charge correctly anymore. With the start of school in September, I parked the Twike while I resumed driving my gas car and plotted the repairs. My first attempt was to charge and discharge all the 20 cell groups to locate the bad boys (which I did) and to attempt to fix them. The easiest way is to charge/discharge candidate groups of cells and measure the capacity of some other packs to locate a candidate group of cells. I was able to do this after a month or two of testing. I replaced one group with the new group but the BMS in this battery failed to come up in the car after I placed it back in the car. Not clear why. In frustration, I swore to give up on trying to use the old Ni Cad cells and move on to my A123 M1 lithium cells. To that end, I finished the design of the pack and over the Christmas holidays, I drew up the design for the new battery packs. I went over to Tap Plastics (right at the start of a big snow storm) and picked up parts needed to build them. Two days of construction and the new packs are done. The picture above is a test fit of the two new battery packs (just the plastic boxes) into the car with the old batteries removed. Fits perfectly with not even a 1/16 inch to spare. I like the very secure fit into the old battery wells. I using ABS plastic. I went with 3/16 rather than 1/4 because I want to maximize cell area. I hope this is strong enough to survive heavy bumps with the cells inside. I'm now into heavy battery pack construction. My goal is an exact replacement for the old packs but with LiFePO4 cells (A123 M1 cells). I'm planning on a 112s5p configuration with the 2.3Ah cells which works out to 4.24KWH pack and a range of 50 to 60 miles (assuming 60WH/mile).
Posted by Phil Hochstetler at 10:23 PM No comments: